For a better experience please update your browser.

Your browser must have cookies enabled otherwise you will not be able to login or register. Please enable cookies in your browser and then refresh the page to continue.

This event is sold out

Your data is being transmitted securely via a strong 256-bit encrypted SSL connection.

Total booking fees comprise charges for IT services, credit card charges and/or other administrative fees allocated by the event organiser

Proud Camden, in partnership with Experience Hendrix and Sony Legacy, will be hosting a very special evening with Classic Album Sundays on Tuesday 6th October at 6:30 till 8:30pm marking the launch of the photographic exhibition, ‘Jimi Hendrix by Eddie Kramer’ and the upcoming release of The Jimi Hendrix Experience 'Freedom: Atlanta Pop Festival'.

Classic Album Sundays is the world’s most popular and respected classic album listening experience as it allows fans to get closer to the music. For this event, Hendrix producer Eddie Kramer will speak with CAS founder Colleen ‘Cosmo’ Murphy about his work and friendship with the legendary guitarist and throughout the interview, they will feature songs from upcoming Jimi Hendrix Experience release Freedom: Atlanta Pop Festival on the world-class CAS hi-fi.

They will then play the album in its entirety during the ensuing private view of the photographic exhibition ‘Jimi Hendrix by Eddie Kramer’ – featuring previously unseen and rare images of Hendrix, captured by Kramer himself, whilst sipping complimentary 808 Whisky cocktails.

This is sure to be a very popular event, so please make sure you get your tickets early! 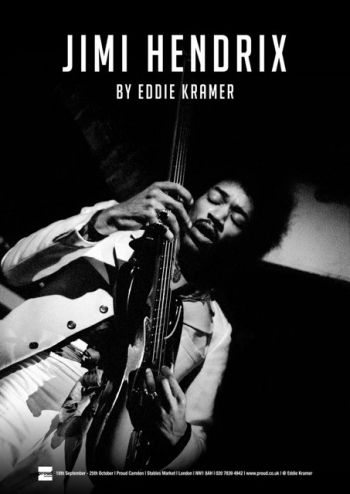